Don't sit too close to the screen…

Letting The Right One In: Identifying with ‘Enlightened’s’ Amy Jellicoe 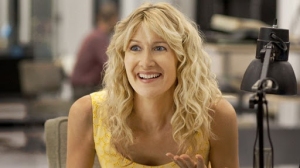 If you’ve read my thoughts on the top ten shows of 2011, you know that I think HBO’s Enlightened is pretty good stuff. Starring recent Golden Globe winner Laura Dern, Enlightened is billed as a comedy, but it’s the most heart-wrenching, cringe-worthy, rollercoaster “comedy” that I’ve ever seen. Each episode is like watching a car accident at varying speeds: dreamy slow-motion, desperate fast forward, and sometimes the pace of painful everyday life. And whose driving this out of control car? Amy Jellicoe.

Post nervous breakdown and treatment, Amy returns to rid her former life of its poison, literally and figuratively. Unfortunately, the world she returns to is not as responsive to her breathy assurances or laid-back attitude as she had hoped. In fact, it remains relatively intractable. Newly focused on environmentalism, activism, and sustainability, Amy chafes against her data entry job at her former employer, a company that knowingly sells toxic personal products to consumers. As she tries to change the company and her life, she encounters constant roadblocks that challenges her, and the viewer, to ask, “Can we really affect change?”

Watching Amy is painful, because, well, she’s Amy.  And she’s always Amy. Whether she was always oblivious to social cues and parameters or she has recently overlooked them as part of her new lifestyle is unknown (I suspect the latter), Amy blunders around like a brahma bull in the china shop. She is always late for work and constantly overstepping the boundaries of coworkers and loved ones in the hopes of reigniting former friendships and allies. Her genuineness drives people, and potentially viewers, away.

So how do we relate with an in-your-face character like Amy? It’s writing 101 that the audience has to identify with a character to engage with a show, book, movie etc. That doesn’t mean we have to like them. There are lots of detestable characters throughout history that have captured the attention of audiences. Hannibal Lecter comes to mind. Despite his perversity, we root for him. We admire his intellect and cunning, and sympathize with him when he’s treated with disdain by the prison officials. Of course, it helps that we don’t really see all the horrible things he’s done. But what about Amy? Do we admire her despite witnessing all her awkward, oblivious interactions?

Certainly, there are admirable things about Amy. She never gives up on her journey to change her life and the lives of others, even if that means swallowing her pride. But, at least for me, admiration is pretty low on my list of emotions I associate with Amy. At the top of list are: uncomfortable and frustrating.

It’s hard to realize that you identify with a character because of your shared flaws, but it’s a powerful link. You might push Amy away at first, but letting her in is cathartic. You may realize something new about yourself. And isn’t enlightenment what you, me, and Amy are all looking for?

Just Me and My Thoughts/TV/TV Review